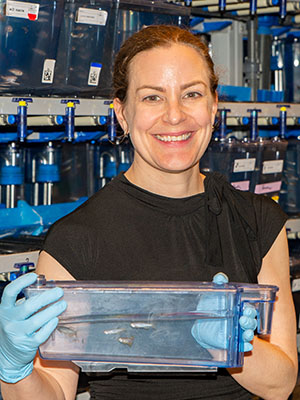 Lavinia is a Portland Oregon native that lived on both coasts of the United States before settling in St Louis. She received a B.S. in Biology from Pacific University with a minor in Music and was briefly a member of the Portland Opera Chorus before entering the Neuroscience Graduate Program at Oregon Health & Science University. At OHSU, Lavinia studied intracellular transport regulation in the lab of Bruce Schnapp. Her graduate training was supplemented with occasional trips to Eugene Oregon where the zebrafish labs at the Institute of Neuroscience would allow her to observe, learn genetic and screening techniques, and share their coffee cake. She also received invaluable mentoring and support from Stephen Johnson, whom she briefly overlapped with at WUSTL many years later.

Lavinia continued to train at OHSU in the lab of Teresa Nicolson, where she was first introduced to zebrafish as a model for hearing and deafness. In Teresa’s lab, Lavinia’s research focused on how hair cells develop and maintain their synaptic connections with afferent nerves. At Mass Eye and Ear’s Eaton Peabody Laboratories, where Lavinia was the inaugural Amelia Peabody Fellow, Lavinia’s research shifted from hair-cell organ development to damage and repair. Since 2017, Lavinia continues this research with her lab team as an Assistant Professor with the Department of Otolaryngology at WUSTL.

Lavinia’s twitter handle (@Oly_Binewski) is in homage to one of her favorite books which was conceived by the author when she was walking through the Washington Park International Rose Test Gardens.